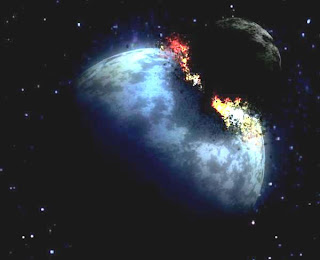 I have been waiting for the end of the world ever since Sunday school in the early 80's. I've read Revelations, Nostradamus, and many of the 2012 prophesies.

Are you coming or what?

I've Wikipedia'd Ragnarok and the Big Crunch. I even experienced KRXX's transformation to KXXR in 1994, when they played R.E.M.'s "End of the World" for two days straight.

For at least 2.5 decades, I was on my best behavior, fearing the end would come "like a thief in the night." I finished five sacraments (including Reconciliation, which is a fucking bitch), attended countless Masses, and even refrained from sex (really, I did), all in the name of being part of the Rapture.

As I grow older and wait for the End of the World, my patience is in short supply. My ability to live in fear is diminishing. I have text messaging; I have better things to do than wait.

Even recently, when birds were dropping from the sky in Kentucky and fish dying in mass in Louisiana, my reaction time was slow. I continued on my deviant path as though end times were just crying wolf.

While I'm not opposed to falling to my knees and repenting, I am going to need to see some real proof that this IS IT.

If a meteor doesn't hit the Earth and California doesn't fall into the ocean, I'm just going to keep on living as though I'm the center of the universe and put Jesus on my nightstand until further notice.

Unrest in Cairo or an uproar in Tunsia just isn't going to cut it for this girl to get ready for salvation.
Posted by Ellie Rogers at 6:22 PM 1 comment:

Dear State of the Union Address and Rebuttal

Dear State of the Union Address and Rebuttal:

I have some commentary for you, k? K. 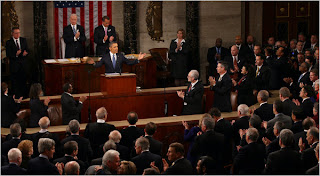 - Use of the word fierce in the first 30 seconds. Damn right Obama. We are fierce, and we’ll whoop yo ass you slut… wait… not Maury? Oh… ok, refocused.

- Extended religiosity of the rebuttal: Wow. Way to alienate more than half the country. Guess they’re not really your demographic anyway though, so they don’t matter, right?

- DREAM act support: Absolutely the right thing to do to allow undocumented immigrants who have been educated and have excelled here in the US to stay and become citizens. Difficult to structure though really… but I’m impressed by the shout out.

- High speed rail: After my pleasant Amtrak experience, I’d much prefer to be on a high speed rail line than on a plane. And the energy and emissions expended per passenger would be much lower. Hooray! MPLS would be much more appealing if Chicago wasn’t 7 hours in a car or 100+ dollars and still 2 ½ hours in the airport/plane.

- Admitting we have one of the highest corporate tax rates in the world – ballsy Obama, ballsy. Good luck on those loop holes though. Those loop holes pay for a lot of dinners on the hill.

- John Boehner looking like he’s about to poop his pants right up until the point when he cried. Wonderful.

- Making all the secretly racist white dudes who are afraid of A-rabs stand up to support American Muslims.

- Joe Biden fist pump. Hells ya. I’d ride the Amtrak with you any day Joe.

- Awkward clapping as the mixed seating doesn’t allow for one ideological side to unify around if they will clap or not clap.

- Call to respect teachers… but no funding to actually do so.

- John McCain smirking and clapping that ear marks are bad.

- “Small business” or entrepreneur pandering: 6. At what point do small businesses go from being the end all be all to the evil giants who take advantage of us all? 500 employees? Is it based on departments? Maybe market cap? Where is this imaginary line of good and evil?

- Though the shout out to Don’t Ask Don’t Tell repeal is good… the preceding comments that refer to all major faiths but not atheist is awkward. You can be a man who loves a man, but you better also love some monotheistic god or else.

-Paul Ryan’s plain awkward and creepy 400 Club delivery style. Is he trying to get me to send my gold in the mail? I think he just told us the rapture is here. I don’t know. I can’t even hear him. Though I think he just told us that free enterprise itself solves poverty which I’m pretty sure isn’t true… no matter what you think of unions now, there’s a reason they developed historically.